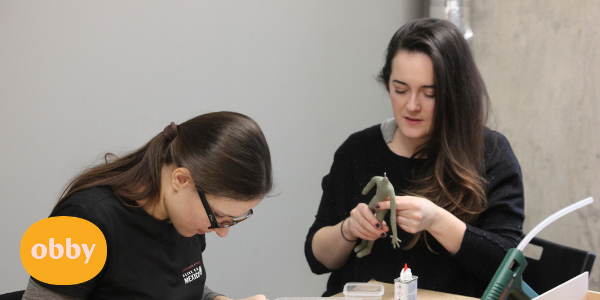 Today we are speaking to Jennifer Kidd from Ctrl Art Del. Jenny teaches amazing stop-motion animation workshops, including silicone puppet making. She is the only teacher for that topic in the world and has students flying in from Hong Kong, Dubai and elsewhere to take this specific course. Jenny is a very successful stop-motion animationist, working on sets of various movies, including the Isle of Dogs. We've got a real superstar in our midst here!

What is stop-motion animation?

Stop-motion animation is where you move objects incrementally in-between frames that are sequentially brought together in post-production to produce an animated film where those objects are brought to life.

Is there any famous stop animations we might recognize?

Yes, there are lots of stop-motion films that you will recognize.

You will know feature films such as:

Then there are also TV series such as:

Are stop-motion animations usually in video format or photo?

This is an interesting question and one that I did my dissertation on.

Up until the release of the DSLR camera, stop-motion films were shot using a film camera. This was a tedious process as you could not see what you had animated until the film was developed. Surface gauges were used to guide the animator, but there was no technology really until the early 2000's when software such as Dragon Frame was released where you could see your set in 'live view'. This allowed you more control and saved time by allowing the animator to see what they were doing before taking each shot and replay what they had already done to see the progression of movements along the way.

The Corpse Bride was the first feature film where the digital camera was used, and even then they did not have the technology we have today such as Dragon Frame where we have 'live view' and can see our sets before taking a picture and make amendments so that we don't make a movement that is too sharp in comparison to the images before. Instead, they inserted a tiny camera into the viewfinder and projected that image onto another screen so the animator could see what they were doing in order to create a more seamless animation.

Explain the process of stop-motion animation to us. How does it work from start to finish?

To make a stop-motion film there are a few processes involved.

How did you get into teaching stop-motion animation workshops?

I started teaching stop-motion animation workshops when I was doing an art residency in Dublin.

I was exhibiting at the time and was approached a by a few students who wondered if I ever taught workshops as they were interested in learning this technique. From there I started my first workshop which was a six-week evening course teaching the basics of stop-motion from building an armature, designing and creating a plasticine puppet, building a set, storyboarding, making props and finally animating. After this, they would have an animated video as well as their puppet upon completion.

Since then other kinds of workshops have been requested such as the foam and latex workshop which I am doing now in addition to the stop-motion workshop and these are both two-day courses.

I am expanding more to teaching more detailed and advanced workshops as well as shorter courses such as the lip-synching workshop which is an evening course and a great introduction for anyone wanting to see what the world of stop-motion is all about.

Thank you to Jenny for taking the time to inform us about stop-motion animation and the process you go through when making it!

Have we peaked your interest? Have a look at how Pingu was made here. Check out Jenny's stop-motion workshops on Obby