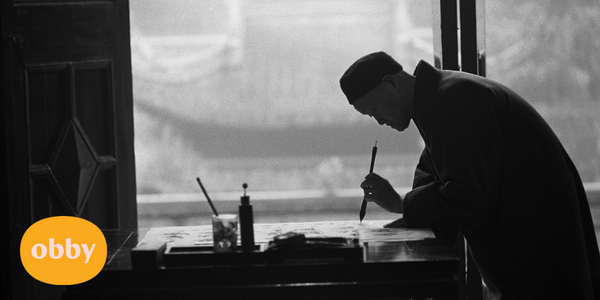 Chinese calligraphy classes are rare to get hold of in the UK. Often held at Chinese community centres, or prestigious universities, this traditional art is difficult to master and very well respected. Calligraphy literally translates as 'beautiful writing.' In China, from a very early period, calligraphy was considered not just a form of decorative art; rather, it was viewed as the supreme visual art form, was more valued than painting and sculpture, and ranked alongside poetry as a means of self-expression and cultivation. How one wrote, in fact, was as important as what one wrote. It's so highly respected even still in Chinese culture, and it really is a beautiful art to learn because of it's controlled methods and meditative effect.

During this course, our skilled tutors will take you step-by-step through the various techniques, styles, and histories of this genre. Learn about different types of papers and brushes and their material significances, as well as the diverse range of inks, and ways of articulating marks and compositions. Perhaps even pick up on some Chinese characters as well! This course is intended for pupils across all skill levels - We will be able to accommodate specific interests as well as teach more general techniques and methods. Feel free to experiment and sharpen your skills in an energizing yet meditative and relaxing atmosphere.

Find out more about this Chinese calligraphy class

This introductory workshop will mainly focus on the regular style, covering the basic strokes, the rules for stroke order for writing common words and phrases. There will be a particular focus on popular phrases and titles used in Chinese brush paintings of flowers and birds. The Prince's School of Traditional Arts is a school that teaches and research arts and crafts of the world's greatest traditions. Their classes are highly sought after and often sell out. They are one of the best places in the country, never mind London, to learn traditional arts, and Chinese Calligraphy is one of them.

Find out more about this course

The London Chinese Community Centre was founded in 1980 as the first in the country. The centres mission is to preserve and promote the Chinese culture but it also helps the Chinese community integrate better into UK culture. Their Chinese calligraphy class is held by Chinese tutors who have perfected calligraphy for years. The class is every Saturday from 3 pm till 5 pm and is £70 for 10 sessions. It's a very cheap and authentic way to learn Chinese calligraphy, although you do have to be a member to join. The membership costs around £12.

Find out more about this Chinese calligraphy class

This four-week crash course is a perfect introduction to Chinese calligraphy. Chi has been studying Chinese Calligraphy since she was 5 and has developed this course after many years of teaching to be tailored for complete beginners. You'll cover the basics from everything, from brush painting to Clerical Style. These classes are small, with a maximum of 12 students, meaning Chi can get around everyone with plenty of personal attention.

Find out more about this class